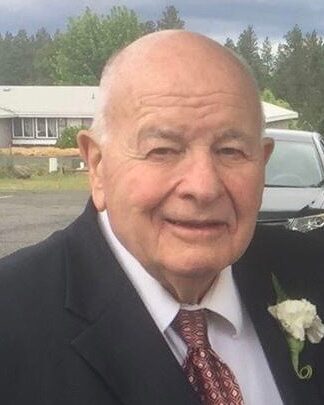 LaDell Guy Brown, 84, passed peacefully away on Friday, December 10, 2021, of natural causes surrounded by his family. Most recently he resided in Ogden Utah, however, he and his wife Eleanor raised their family mostly in Tooele County, Utah. They also lived in West Jordan, Utah; Bishop, California; and Price, Utah.

LaDell was born September 23, 1937, in Huntington, Utah, to Guy Adelbert Brown and Mary Jane Jones. He grew up on a dairy farm there. He graduated from North Emery High School, class of 1956. He was a member of the United States National Guard, serving from 1956 to 1963. He served as a missionary for the Church of Jesus Christ of Latter-day Saints in Cibicue, Arizona from 1957 to 1959. Subsequently, he graduated from Brigham Young University with a bachelor’s degree in Animal Husbandry along with a minor in Social Work. He also earned a master’s degree from the University of Utah in Social Work (MSW).

LaDell married Myra Eleanor Nielson on July 16, 1960, in the Manti Temple. They are the parents of 7 children.

LaDell started his career as a Licensed Clinical Social Worker in Price, Utah. Throughout his career he was a Family and Marriage Counselor. He was also Director of Mental Health services in Bishop, California and Tooele, Utah. Although his counseling work was fulfilling, he missed a connection with farming and animals. In about 1974 he became a “gentleman farmer” (working at the office during the day, with evenings and weekends spent farming). LaDell and Eleanor bought a small farm in Erda, Utah where their family could be raised in a rural setting featuring the farm labor LaDell enjoyed. They raised grain, alfalfa, a large garden, and most common farm animals—including milk cows and horses. LaDell often quipped that his farm was “not an effort to raise money, but rather—to raise kids.”

LaDell was a fully committed member of the Church of Jesus Christ of Latter-day Saints. His church service included being called as Bishop twice (Bishop, CA and Erda, UT) and as Stake President of the Grantsville, Utah Stake (1986 – 1994). Later he was President of the US Federal Halfway House Branch in Glendale, UT. He and Eleanor also served two missions together (Employment Center in Tooele, Utah and a teaching mission in Window Rock, Arizona). LaDell also served as a Temple Ordinance worker at the Salt Lake Temple for nine years.

A viewing will be held Saturday, December 18, 2021, at the Church of Jesus Christ of Latter-day Saints at 415 W. Apple Street in Grantsville, UT from 9:30 am to 10:30 am.  The funeral will follow at 11:00 am. A graveside dedication will follow the funeral at the Tooele City Cemetery.

The funeral services will also be live streamed at https://watching.church/grantsville7th.

Flowers may be sent to the funeral address (above) to arrive at 9am December 18th (local florists will accommodate).

Arrangements in care of Dalton-Hoopes Funeral Home. 435-884-3031   Online Condolences and memories may be shared at daltonhoopes.com