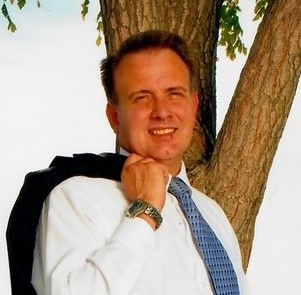 We mourn the untimely passing of our beloved husband, brother, father, and grandfather, Todd Thain.  Todd was a tough 60-year-old, having survived a heart attack and an esophageal tear in the last few years.  He finally succumbed to Early Onset Alzheimer’s on March 25, 2021.

Born in Ogden, Utah on December 2, 1960 to George Jae and Claire Billings Thain, he grew up in Logan, Utah; Pueblo, Colorado; Rosemount, Minnesota; Glasgow AFB, Montana; and Bountiful, Utah where he graduated from Bountiful High.  He served as a full-time missionary for The Church of Jesus Christ of Latter-day Saints in the British Columbia, Vancouver Mission.  Todd graduated from Weber State University with a BS in Electronic Engineering Technology.  Todd was a loving and dedicated husband and father. Together with his first wife, Jeanene Nielson, he raised a son and three daughters. When Todd was sealed to Janis Harmon on September 4, 2009, he was blessed to become a bonus father to her three adult sons.

Todd loved both mechanics and electronics. As a boy he was dedicated to his electronic project kits and enjoyed learning mechanics from his father. Later, as a young teenager living in eastern Montana, Todd bought and repaired a used Yamaha motorcycle which he rode with great enthusiasm across the open prairies near his home. This activity required avoiding prairie dog holes and a section of land filled with empty basement foundations of never-built homes. To the great relief of his mother, Todd was good at handling his bike. After Todd returned from his mission, he purchased a boombox that he kept for many years beyond its normal lifespan because of his electronic repair skills. Todd also bought a beat-up Toyota Celica and spent hours repairing and fixing it up. The finishing touch was a new paint job with two large racing stripes down the middle.

Todd’s first real job was at the Lagoon amusement park in Farmington, Utah where he was part of a team that assembled the double-loop rollercoaster known as Colossus the Fire Dragon. Todd worked at the park for many years and was a much-valued employee due to his friendly nature, strong work ethic, and impressive skills at repairing and maintaining many, if not all, of the different rides at the park.  If you visited Lagoon during the 1980s, you likely enjoyed a ride Todd serviced.

After graduating from college, Todd began work in the electronic medical device industry and was employed at several small companies involved in advancing the technology. Todd then worked in the clinical engineering departments of several hospitals, including Primary Children’s Medical Center, where he performed the critical hands-on work of maintaining and repairing the various monitoring devices doctors and nurses depend on to treat their patients and keep them alive. Todd helped save lives through the work he did.

Todd and his wife, Janis, enjoyed traveling together to interesting places near and far.  He loved visiting Alaska, Hawaii, Mount Rushmore, the Grand Canyon, and the Redwood Forest.  As a faithful member of the Church of Jesus Christ, Todd loved to sing the hymns, which he knew by heart.  Todd was a devoted husband and amazing father and grandfather. When things were tough, he stepped up and took on additional responsibilities at home to care for his family.  His skill and generosity in repairing almost any kind of electronic device was especially called upon and greatly appreciated by family and friends.  As a grandfather, he gave amazing horsey rides to the delight of his grandchildren.

Todd’s quiet friendship and service will be greatly missed.  We are thankful he is no longer suffering and look forward to a future heavenly reunion with him.  Todd is survived by his wife Janis of Stansbury Park; his four children: Matthew (Maritza), Rachael Mizera (Brandon), Christina McConkie (Rob), and Rose Child (Tryston); sister Michelle Bliss (Jim) of Layton, and brother Steve (Channing) of Taylorsville; three stepsons Nicholas (Nikki), Cody (Dorothee), and Trent; as well as several grandchildren and many loving aunts, uncles, cousins, nieces, and nephews.  He was preceded in death by his parents and daughter-in-law, Dorothee.

Graveside services will be held at the Wallsburg Cemetery in Wallsburg, Utah on Wednesday, March 31 at Noon.  A private family viewing will be held on Tuesday, March 30 at the Dalton-Hoopes Funeral Home at 50 W Main Street, Grantsville, Utah.

Special heartfelt thanks to Rhona B and Bristol Hospice for end of life care.