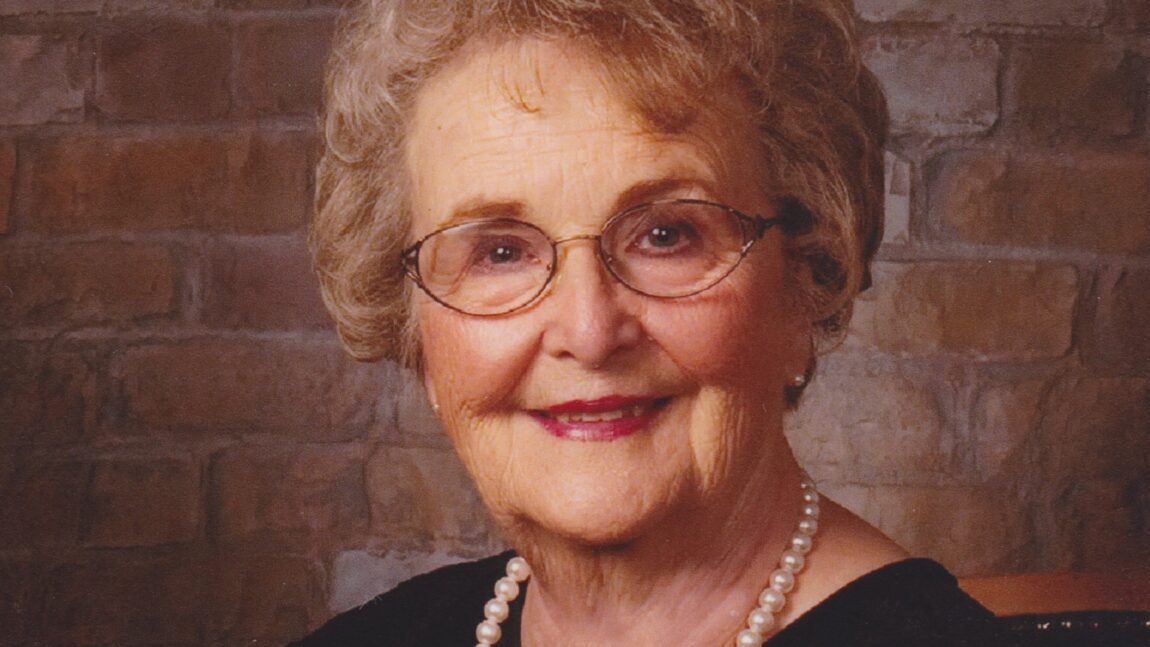 Donna Colleen Riddle Bennion, of Tooele Utah passed away on January 9, 2023 at age 89 at Our House Assisted Living.

Colleen was born May 8, 1933, the second daughter born to Weldo Dee Riddle and Mary Lucille Miller in Copperfield, Bingham Canyon, Salt Lake City, Utah.  She has an older sister Evelyn Maurine (deceased), a brother Glenn Dee (who died at age 3 months) and a younger sister Dwanna Lee. She attended grade school in Upper Bingham Elementary School and attended Plymouth Junior High School.  Colleen graduated from Cyprus High School in 1951. During her sophomore year of high school, she met Rex Palmer Bennion. They dated throughout high school.  They planned to marry in August after Colleen graduated from high school, but due to the Korean War conflict, they moved their wedding date up to January 26, 1951.  They were married in the Salt Lake Temple, and three months after their marriage Rex was drafted into the United States army on Colleen’s 18th birthday. Colleen knew with Rex gone she would need to keep busy. She went to comptometer school while Rex was deployed and she worked at Cudahy Meat Packing Plant and Westinghouse Supply Company in Salt Lake.

Rex and Colleen began their married life in West Jordan, Utah in the home Rex had purchased before he left for the service.  In 1961 they moved to Tooele because of a promotion as assistant manager at the Bestway Lumber Company in Tooele. Rex and Colleen have lived in Tooele for 62 years and have enjoyed raising their family in this wonderful community.

Four children blessed their lives, daughters Christi, Cindy and Sharon, and a son Gary Rex completed the family circle.  Family was everything to Colleen. She enjoyed planning family reunions, parties and made every effort to be to all her grandchildren’s milestones.  A highlight for her was traveling to Israel with her four children in 2017, at the age of 84.

Colleen and Rex were employed at the Tooele Army Depot.  After retirement, they decided they wanted to serve a mission. They were first called to serve an Employment Mission in Tooele from 1991-1992.  A few years later they desired to serve again and were called to the Hartford Connecticut Mission from 1993-1994. In 2003 they received a mission call to

the Independence, Missouri Mission as tour guides at the Liberty Jail historical site for 18 months.  These mission experiences enriched their lives. After returning from their last mission Rex and Colleen became involved in the Utah Sons and Daughters of the Utah Pioneers.  Colleen served for six years as Captain of the Tooele County Daughters of the Utah Pioneers.  She held many leadership positions within the DUP and was an active member starting in 1990.  Colleen also served as a docent for the Tooele Pioneer Museum.

Colleen was an active member of the Church of Jesus Christ of Latter-day Saints.  She served in all the auxiliaries of the church.  She was a ward and stake Young Womens president, and twice as ward Relief Society President; a calling she enjoyed immensely.  She was a counselor in the Stake Relief Society, a teacher and counselor in the Young Women organization, as well as drama specialist, and stake activity counselor. It was while she was serving as a Family History Consultant in her ward that she developed a love for family history.  She began gathering histories, genealogy, and pictures of her ancestors to put together family history books for her posterity.  She did a history and journals for the Bennion Family, transcribed journals and histories of her great-grandfather Vanransler Miller, complied a book for her Riddle ancestors, and a book for the Miller’s side of the family. This was quite a challenge for her as she had to learn how to use a computer at age 76 and she had taken only 6 weeks of typing in high school.

Colleen had many talents, she was an accomplished seamstress, and quilter.  Each of her 26 grandchildren are recipients of her beautiful pieced quilts and afghans. She learned to crochet, knit, oil and watercolor painting, was an avid genealogist and a woman of service.

Colleen is survived by her four children, Christi Cluff (David) of Safford, AZ, Cindy Hollar (Mike) of Tooele Utah, Sharon (Ken) Spence of Tooele, Utah, and Gary Bennion (Lori) of Pocatello, Idaho and her younger sister Dwanna Riddle of Provo, Utah. She has 26 grandchildren, 62 great-grandchildren (with one on the way) and one great-great grandchild.  Her parents, two siblings and husband Rex preceded her in death: along with three grandchildren, Doyle Rex Cluff, Suzanne and Guy Hollar.

Interment will be at the Tooele City Cemetery following funeral services under the care of Dalton-Hoopes Funeral Home.  Online condolences and memories can be shared at daltonhoopes.com