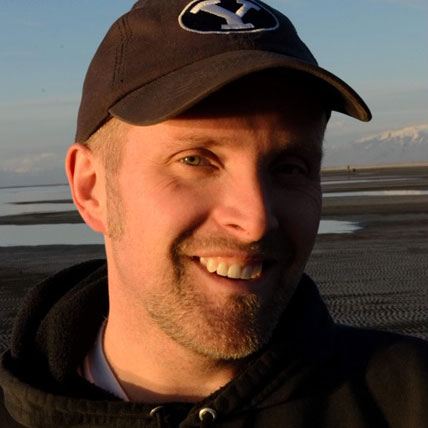 Andrew Stratton Bollard departed this life on 17 July 2020 in Salt Lake City, Utah. Andy was the first child born to Richard Stratton and Kathleen Marie (Taylor) Bollard on 21 June 1972 in Provo, Utah. Andy was the first grandchild in both his mother and father’s families and was spoiled accordingly. Andy’s Aunt Diane, a nursing student at BYU, would even take him with her to classes when he was 2 years old, pulling him around in a little red wagon.

Andy’s family moved from Provo, to Salt Lake, and then to Magna when he was about 8 years old. He and his siblings thoroughly enjoyed growing up in Magna because they had a wonderful group of friends to play baseball with in the spring and summer and football in the fall. Andy was usually the pitcher and quarterback respectively, mostly because he was the bossiest kid there.

Andy attended Cyprus High School where he was involved in the drama department playing a 5 year-old boy in Life With Father, a singing Russian in Fiddler on the Roof and various parts in Working. Andy had a beautiful clear tenor voice and was a member of the Cyprus Madrigals in both his Junior and Senior year, a distinction his son, Joseph, shared.

Andy worked as a delivery driver for Resco for 15 years. He loved his job because he wasn’t chained to a desk and he saw so much of Utah, which he loved.

In April 2000, Andy was set up on a blind date by his sister, Becky, with one of her coworkers and friend, Angie Rasband. Andy and Angie dated for a REALLY long time, 3 months, before they became engaged. Andy and Angie were married on 27 November 2000 in Magna, Utah, and sealed in the Salt Lake Temple on 8 December 2001.

Andy and Angie were the parents of two sons, Joseph and Gideon. Andy was a very good father that taught his sons to be fun-loving, responsible, hard-working, and empathetic. In about 2012, because of his disabilities, Andy could no longer work outside the home and became a wonderful stay-at-home dad despite being in constant pain.

Andy was diagnosed with diabetes in 2010 and was severely affected by both peripheral and autonomic neuropathy. Andy developed diabetic ulcers that resulted in his left leg being amputated in 2018 and his right being taken last week. Andy suffered a heart attack and stroke soon after his surgery and left us two days later.

Andy is survived by his wife, Angie and sons Joseph and Gideon of Price, parents Richard and Kathleen Bollard of Stansbury Park, brothers Matthew (Hillari) of Alpine, Mike (Laura) of Salt Lake, Sister-in-law Kari (Billy) Toler of Tooele, brother Russell (Bonnie) of Stansbury Park, sister Becky (Henri) Vanderbeek of Magna, brother Bradley (Lacey) of Magna, and sister Jeannie (Lorin) Williams of Tooele. Andy is also survived by his mother-in-law, Carol Krebs of Ephraim, sister-in-law Mandy (Chad) Johnson of Orem, and brothers-in-law Cody (Charese) Rasband of Morgan, and Justin (Katie) Rasband of Layton. He is also survived by 30 nieces and nephews, with one more on the way.

A wake will be held for immediate and extended family (aunts, uncles, cousins etc.) at Dalton Hoopes Funeral Home located at 50 West Main Street, Grantsville, Utah on Friday, July 24 from 7 to 9 p.m. Andy will be present, but will not be on view because he did not want to be “on display like a salami in a deli window”.

The funeral service will be held at the Centennial Park Ward located at 3372 Merry Lane, West Valley, on Saturday, July 25 at 11:00 a.m. Family prayer to proceed service at 10:30 a.m. Interment to follow at Wasatch Lawn Cemetery at 3401 Highland Drive, Salt Lake City.

Due to Covid-19 restrictions, only immediate family can attend the funeral service. But the service will be live-streamed through Zoom at the following link. (approx. start time at 10:45 AM Sat)

A GoFundMe account has been set up for Andy’s funeral expenses here.

To plant a tree in memory of Andrew “Andy” Stratton Bollard, please visit our tribute store.